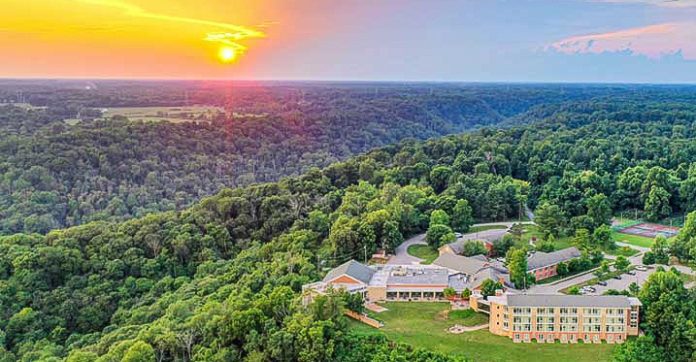 For nearly a century, Indiana state park inns have provided shelter amidst the  natural splendor of our state parks. Generations of visitors have experienced the  warmth, comfort and unique culture of the inns.

“Indiana’s State park inns are rich in history and an integral part of the state park  experience,” said Dan Bortner, DNR Director of State Parks and Resevoirs. Bortner  spent time as a young man exploring Indiana’s state parks with his father, a  professional photographer who frequently contributed to OI.

“There’s nothing quite like sitting in front of the fireplace after a day of hiking at  Turkey Run or watching the sun come up over the Ohio River at Clifty Inn. The  lodges that make up the Indiana State Park Inns system are truly wonderful places  where visitors can enjoy the outdoor experience and still have the comforts of  home,” he said.

With seven locations to choose from, 630 rooms, meeting space and more, a  state park inn is the perfect location for a family getaway, romantic retreat – even  a business conference.

Since the old sanitarium at McCormick’s Creek State Park was turned into the first  inn, much has changed. Today’s inns deliver, first-class service and amenities  mixed with just enough rustic charm to remind guests they’re surrounded by the  great outdoors.

But in 1916, the inns’ inaugural year, things were a little different.

“Originally, the inns were an alternate to camping,” said Gary Miller, assistant  director for inns and concessions, DNR Division of State Parks and Reservoirs.

“You have to remember that from here (Indianapolis) to Turkey Run State Park  might have taken five hours in the early 1900s. If you wanted to stay but didn’t  camp or didn’t want to camp, the inns were set up for those who still wanted to  stay overnight.”

In addition to long travel times, amenities in the early days of the inns weren’t  exactly luxurious.

“None of the rooms had bathrooms in the guestrooms,” Miller said. “They were  simply your sleeping quarters you may have had a wash basin. The bathrooms  were community bathrooms down the hall. They didn’t have great big meeting  rooms. They still had restaurants and maybe smaller gathering places. But back  then, the idea of going to the park was spending time out in the park. And  actually, that’s the way some of the federal properties started as well, like Old  Faithful Inn at Yellowstone.”

It’s no coincidence that Indiana’s inns share some attributes with national park lodging. The father of the Indiana state park system, Colonel Richard Lieber, was  strongly influenced by the fledgling national park system. Luckily for us, he also  happened to be a Hoosier.

Lieber, already a nationally-known conservationist, led the effort to set aside  special areas of the state for preservation and recreation. As a result, Indiana’s  park and inn system was developed at the same time as the federal system.

Inns and lodges were constructed at some of the earliest, most popular properties  in quick succession. Unlike many of the lodges in national parks, Indiana’s were  built by the state instead of concessionaires.

Established in 1916, Canyon Inn at McCormick’s Creek State Park was first. Turkey  Run Inn at Turkey Run State Park came next in 1919. Clifty Inn at Clifty Falls was  built in 1924 (though none of the original structure remains). Potowatomi Inn at  Pokagon State Park followed in 1927, Spring Mill Inn at Spring Mill State Park in 1929, and Abe Martin Lodge at Brown County State Park was last, opening its  doors in 1934.

Two properties, Shades and Dunes state parks, had inns that are no longer  standing. Dunes actually had two hotels at different times. One was the Dunes  Arcade, designed by John Lloyd Wright, son of famous architect Frank Lloyd  Wright. It was taken down in 1969. Shades State Park originally had a very old  structure, built in 1887; it was torn down about 1970.

The inn building boom came to a close after Abe Martin Lodge was built.

“Some of the factors that stopped it were the war effort, and then the DNR made  a decision that they wanted to put more emphasis on family cabins instead of  building lodges,” Miller said.

Since the last one was constructed 77 years ago, the DNR has focused on  maintaining and improving the inns. As times changed, so did the expectations of  inns’ visitors. The DNR realized that if these venerable structures were to remain  popular tourist destinations, they must adapt to the needs of modern visitors.

The DNR began updating and improving the inns in the 1960s. Over the next 10 to  15 years, they transitioned from the original idea of an alternative to camping to  more comprehensive facilities akin to a hotel. These changes took place inn by inn as funds and time allowed.

Miller took over as assistant director for inns and concessions in 1983. Under his  direction, the inns have made another leap forward. The inns system is now on  par with, if not superior to, other lodging facilities in similar price ranges. Yet the  inns still have the advantage of being located in some of Indiana’s most scenic  natural areas, and have retained their original charm.

“Since the initial modernization, the mission has been continual improvement in  facilities and to be more competitive in the marketplace,” Miller said.

An important aspect of the improvements has been making the inns attractive to  a broader range of clientele. One example is adding space for business functions,  which has helped increase the inns’ occupancy, especially during traditionally  slow times.

“Many of the lodges weren’t open throughout the winter,” Miller said. “Obviously  now all of them are, but during the wintertime you need to have your business  groups and conferences. That’s why we started building meeting rooms and  conference centers. We have modernized over time to the point where, take  Potowatomi Inn, we have over 11,000 square feet of meeting space.”

Not all improvements have been aimed at the business community. Abe Martin  Lodge recently opened an exclusive attraction that is sure to please a younger  demographic.

Whether water parks or conference centers, the inns’ commitment to providing a  friendly, affordable and diverse experience is paying off – literally. The inns are  one of the few state enterprises that don’t rely on taxpayers. It’s also an industry  leader, even by private business standards.

“The inns are self-supporting,” Miller said. “We do not receive any appropriated  funds for operations. Sometimes we may use those funds for remodels, but not  for operations, and we never have. We lead all the state park lodging systems (in  the country) in occupancy. And as a matter of fact, we usually outpace the private  sector.”

“For instance, in 2010 we ended up with 60 percent occupancy, which is slightly  down for us, but the whole industry was down. At the same time the (private)  industry was doing 53 percent in the United States. So we were 7 percentage  points higher than the U.S. private sector average (numbers via Smith Travel

Numbers don’t lie, and neither does the loyalty the inns inspire among their  visitors. Since the first inn opened its doors to early park visitors, they’ve been  much more than just places to stay. For families far and wide, visiting a state park  inn often becomes an annual tradition that transcends generations.

For the last 23 years, Fran McKinney and her family have visited Abe Martin  Lodge. Each January they reserve at least six rooms, and four generations– grandparents, grandkids and everyone in between-spend quality time together  relaxing in and around the lodge.

“(The visit) has enabled us to spend slow time visiting, hiking and playing  together. We know there will be a warm fire in the fireplace upstairs, good food  in the dining room and fun in the game room,” McKinney said.

As it does for countless other families, the inn’s mix of tradition of modern  amenities provides just the right balance for a satisfying experience.

“For many years,” McKinney said,” the lodge never changed, which was  comforting and familiar.”

But she also explained how the small children love the new, state-of-the-art water  park.

“I hope the kids will continue to bring their families when they’re grown,” she  said.

If history is an indicator, Fran McKinney’s hope is likely to be a reality as the inns  system continues to modernize and add amenities, yet keep the woodsy feel that  only an old lodge can inspire. It’s a delicate balance, but Miller and the inns staff  seem to have it down pat.

“We always want to be able to provide clean hotel rooms and good food at  reasonable prices. We’re trying to build memories. We want people to have a  relaxing experience with us– and a friendly experience,” he said. “Different than  just going to a Holiday Inn Express, where you see the front desk clerk and you  might see a maid, we want to welcome people into our home.”