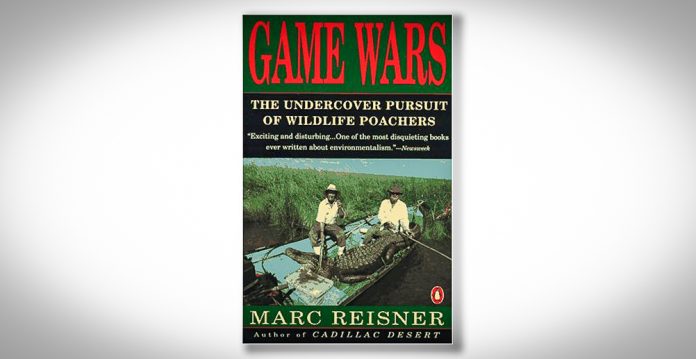 I have a lot of books. I read a lot of books. Usually I buy them and they show up in the mail. Game Wars, however, showed up on its own accord. My wife and I were recently visiting her family in North Carolina. My father-in-law and I have similar, if not somewhat obscure, tastes in literature. He intended to send a couple books home with me, but it slipped our minds. He kindly followed up by sending my wife and I a box including a few things we’d forgotten and the books he intended for me. Among the lot was Game Wars.

I’m not going to recap the whole book, but I’ll tell you why it’s important. First of all, the author, Marc Reisner, is one hell of a writer. I had an interest in the subject matter before I opened the book. If need be, I was prepared to endure a slog to do some learnin.’ Not necessary; I was pleasantly surprised. The opening paragraphs establish Mr. Reisner’s ability to weave a tale.

The narrative follows federal game warden Dave Hall’s extraordinary career fighting – often literally – poachers and game law violators all over hell’s half acre. For reference, hell’s half acre is the whole United States, from Louisiana to Alaska with plenty of stops in-between.

Hall had a deep compulsion to protect wildlife from being poached (taken illegally) because he deeply believed that poaching is often the primary cause for the significant decline of a given species – alligators and waterfowl being two prime examples.

This sounds elementary, but within the conservation community, there’s often no clear consensus why a specific wildlife population declines. Drawing on his experience in the field, Hall frequently had his own strong opinions, and he would often be proven right.

Hall was no boy scout officer. His hot temper and deep experience in the woods and on the water allowed him to identify with violators in ways other officers couldn’t, or wouldn’t. By arguing logic and love for the game, Hall turned poachers into born-again conservationists on multiple occasions. But this isn’t a book with a feel-good ending.

More often than not, Hall won the day, but his victories seem Quixotic in the overall context. The pressure on wildlife and wildlife habitat is coming hard on all fronts, and has been since Europeans showed up for an extended stay. True, we’ve had successes worthy of celebration. Here in Indiana, whitetail deer and turkey come to mind.

But we have to keep an eye on the long game. Hall’s perspective was continental, along with a keen interest in Africa and Asia. He understood the fate of wildlife and habitat is often intertwined with industry and markets.

Hall and the Reisner, the book’s author, were deeply worried; we should be too. Game Wars was published in 1991, I’m afraid to compare the environmental stats outlined in the book to today’s numbers.

After finishing the book, I called my father and asked if he’d read it. He said of course he had, sounding a bit incredulous. I wasn’t surprised, I suppose we’d just never discussed it explicitly. You see my father was a game warden in southeast Indiana for over 30 years.

When he started work in the field, the radios didn’t work down in the valleys, and that part of the state was notoriously rough. Back then a badge might get you compliance, or it might get you a pissed off group of guys, almost always armed. The tools of day were common sense, nerves of steel and respect for the general public. Violence was clearly an option, but only as a last resort.

My father met Dave Hall in the ‘90s and they became friends. Though Hall was of a somewhat earlier generation, I think the commonality of risking life and limb for a common cause created a sort of kinship.

I met Hall as well, but was young enough the gravitas of his story was lost on me. Only later would I realize his place in the history of conservation in this country.

Even though, embarrassingly, I didn’t know the full Dave Hall story until I read this book, I remember his name was always mentioned with respect and a little awe in our household. Now I know why.

In a small twist of fate, the book my father-in-law passed on to me was given to him by my father. I had no idea.

Rarely is the Area Planning Commission and the hunting community concerned over the same topic. But in Franklin County, both groups have been discussing...
Read more
Previous articleSmall Streams & Smallmouth Bass