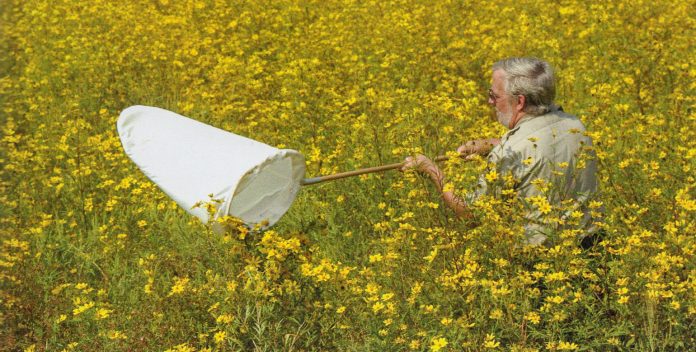 Tag a butterfly? My initial response was incredulous. I had visions of a miniature water-fowl-style band wrapped around the neck of an ailing monarch butterfly. The truth of the butterfly tag, however, is much more intriguing — and humane — than it sounds.

In the name of science, thousands of people across the country affix small stickers to monarchs prior to their southward migration. Their journey is not only extraordinary among animals of all sizes, but baffling to scientists and researchers in its scope and precision.

Each fall most every monarch butterfly east of the Rockies migrates to a 200 square-mile patch of land high in the mountains west of Mexico City. Like leather-clad bikers flooding into Sturgis, 8 to 10 million of the orange and black insects move in and dominate the landscape. A living, fluttering nightmare for insectophobes, but a dream for monarch researchers, the congregation of butterflies provides an opportunity to find tagged specimens.

Though he’s never seen the Mexican mass of monarchs, Jeff Riegel plays a part in the monarch mystery. He tags monarch butterflies in the Northfork Waterfowl Resting Area of the Monroe Lake property. Riegel has been at this tedious, yet scientifically valuable, task for 20 years. The migration, he says, is “so dog-gone mysterious you can’t help getting involved.”

And what a mystery; even hard-nosed scientists admit they don’t know exactly how monarchs navigate the often thousand-plus mile journey to the same location every year. The story, however, only gets more bizarre from here.

The monarch that makes the trip south from, say, Monroe Lake isn’t the one that returns in the spring. After our butterfly makes the journey from the Midwest to Mexico, it dies soon after it begins the return journey northward. Before it dies, though, it lays eggs that produce more butterflies that continue the north-ward migration.

Another one or two generations later the butterflies will begin the fall migration again. On average, the butterfly that returns to the original location is three to four generations from the one that began the journey. How can a butterfly remember where its great, great grandmother embarked from almost a year earlier?

Taggers like Riegel are on the front lines of the battle to crack the monarch code. The information he and others across the country collect goes into a database that eventually combines the data from taggers in the United States with that of researchers who look for tagged butterflies in Mexico.

Researchers and locals paid by them search the multitudes of monarchs looking for those elusive few with tags. Keeping in mind the figure of 8 to 10 million, the number of tagged monarchs found by researchers is surprising.

During one particularly productive cycle of tagging and finding, Riegel tagged 100 butterflies, six of which were found in Mexico. And he’s not the only one sneaking up on butterflies with a net. The Web site www.monarchwatch.org estimates that over 100,000 people a year participate in monarch tagging.

An outreach program at the University of Kansas, Monarch Watch is the clearing house for information gleaned from butterfly tagging; www.monarchwatch.org is its Website and informational resource.

Orley “Chip” Taylor, a professor at Kansas, started Monarch Watch in 1992 as an educational outreach program. According to the Website, the program now includes more than 2,000 schools, nature centers and other organizations in the United States and Canada.

After years of scientific research, Taylor has his own theories on the monarchs’ unique navigational ability. Monarchs, he said, couldn’t stay the winter if they wanted to.

Most butterflies in the Northern Hemisphere have a natural resistance to the cold, such as anti-freezing properties in their body fluids, that allow them to survive low temperatures. Monarchs don’t.

And for their exceptional navigational skills? You might be surprised by Taylor’s theory. “My gut reaction is that they’re using the magnetic system in some way,” he said. “Probably the magnetic field.” They have the mineral magnetite in their bodies, lcated around their motor systems, which allows them to detect magnetic energy, explained Taylor.

Experiments he conducted in the field lend credence to this theory; strong magnetic pulses make monarchs crash. Local information also factors into the monarchs’ ability to make cross-country trips without stopping for directions. Monarchs read the environment around

them, Taylor said, acquiring information about their location.

There’s evidence that they can even integrate latitude with longitude which, even among other expert natural navigators, is a difficult feat. Celestial navigation may also play a role in the butterflies’ sense of direction.

I asked Taylor about the implications of an insect performing the seemingly impossible task of migrating long distances with laser-like precision. And why, if our 21st century scientific community is so advanced, can’t we explain the actions of animals about the size of a paper clip?

What does this really say about our knowledge of the world around us?

Feats of natural magic, evidently, are all around us even if we don’t realize it. More than a few species of animals that roam the wilds are capable of things we  have trouble fathoming. Taylor gave the example of salmon.

“How do salmon orient mid-ocean? How do they travel thousands of miles back to the rivers where they were born?” Taylor asked. The short answer is we don’t exactly know.