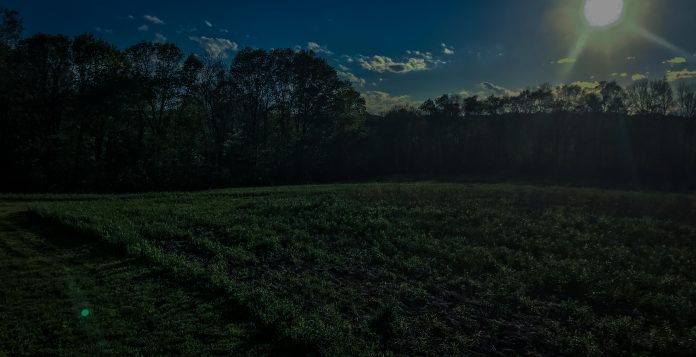 I’m going to tell a story I’d rather not, because sometimes bad stories are the best stories.

Late last gun season I shot a big doe at 85 yards with a .44 magnum rifle. The shot felt good. She was broadside, bucked like she was hit and bounded off separately from the other deer.

Dad and I climbed down expecting to find the doe on a wooded hillside just beyond our vision in the shooting house. We didn’t even take the rifle.

The deer wasn’t there, or anywhere near where she should’ve been. Dusk was on us and night wasn’t far behind. The temperature was somewhere in the teens and a foot and ½ of new snow covered the ground.

We kept looking and I found fresh blood way up the hillside, just a few specks.  The clean snow nearly made it glow. Off we went, as fast as we could in our boots.

Franklin County is steep and rough. This property is hardly the exception. It’s big and remote, all ridges and valleys. The only part of it I saw for the next hour was a continuous patch 10 yards in front of my nose. The blood trail was consistent with occasional gushes and pieces of what we took to be lung. She had to be just over the next ridge, but she never was.

I came up for air in a small valley. My Dad, who evidently has the stamina of a 30 year old hopped up on adrenaline, stood next to me. There hadn’t been time for conversation as I dragged us far into territory I didn’t recognize. Even the bright white snow couldn’t hide the fact that it was officially dark, or minutes from it at best. He gave me the “what do you want to do here?” look.

“How long ‘til you think we need to start walking out of here?” I asked. The answer was 45 minutes ago, and I knew it. “What are we going to do if we find the deer?” he responded.

We were nowhere near anything that could pass for a road, not even considering the snow. “Do you know where we are?” I asked in return, because I sure as hell didn’t. He looked around for a few seconds and said “sort of.”

In total, between the two of us, we had two pocket knives, a pair of cellphones with no service and a nice Smith revolver. Be it motorcycles, boats on big water or a life that includes firearms and an affinity for remote areas, managing risk is the key to stacking the odds in your favor – and I’d pushed it far enough.

We marked the blood trail with an X of large sticks and started the slog out. The hike back to the truck was long and uphill both ways, but thankfully uneventful. On the ride home we called the landowner. In the morning we would take his quads as close as possible to where we left off. He would go along, using his intimate knowledge of the property to help.

A late dinner and a few hours of sleep later we were back on the property in the morning. After a considerable ride to our X made of sticks, I again put my nose down in pursuit. The blood trail was still clear, and such a cold night gave hope my doe wouldn’t spoil.

With the landowner keeping tabs on our overall position, we shot back into the hills dead set on finding this deer. Specks followed by pools of blood, then nothing for too long, followed by a fall where she’d bleed into the snow, and on and on we went.

By mid-day nothing had changed. The trail was consistent, no more or less blood, and it seemed to go on forever. Eventually the track crossed back over itself near where we’d left off the night before, and climbed a steep hill into thick second growth.

It was a bedding area. My doe’s tracks intermingled with tens of others’ and began circling and doubling back. I could still find blood but her direction of travel became near impossible to determine amidst the other deer.

I eventually found where she bedded for the night, blood still matted into the snow and earth. Dad and I walked bigger and bigger concentric circles looking for her exit from the area.

We never saw another sign of that doe, and another week of looking wasn’t going to change it. I called the search later that afternoon. It was the first deer I’d ever lost, and one of the very few game animals of any size I’ve failed to find.

My Dad and I’ve talked about it at length, but until now I’ve shared the story with very few. Maybe I’m embarrassed, maybe I thought if you shot well (which I pride myself on) and refused to give up this wouldn’t happen. Or maybe deep down I thought I had enough experience and skill to control the variables.

But that philosophizing is largely self-important bullshit. We all have a responsibility to be as proficient and committed as possible, but there are no guarantees. Experience and skill greatly increase your odds of success, but actual control is an illusion. My story is part of the wonderful and sometimes terrible experience we share in traditional outdoor sports. I knew it before, but now it’s just a little more real – and I’m a better hunter for it.

When considering story ideas, I encourage you to share your successes and your failures. I’ll be back in the field this fall with a new perspective, giving the same to our readers is a gift we’d do well to provide.

Originally published in The Blade.