Tag Nobbe: Business of the outdoors

Tag Nobbe: Business of the outdoors 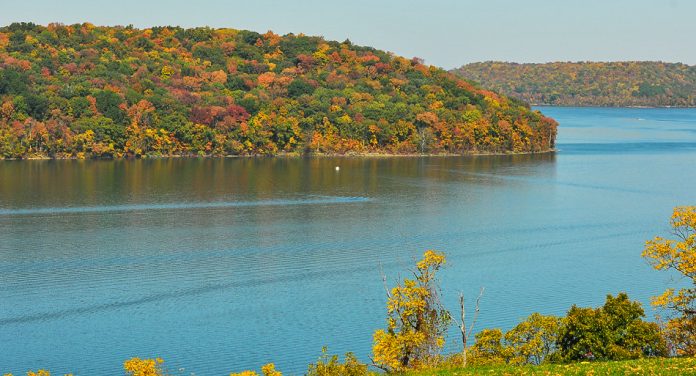 A few minutes with Tag Nobbe and you’ll realize the places, people and culture of the Brookville area are central to his way of life. Spend a little more time around Brookville and you’ll find Nobbe is equally important to the region he calls home.

For most of his 50 years, Nobbe’s been a successful, local entrepreneur and businessman. He and his two brothers are  self-employed, well-known members of the community. Their primary business is a gas station and convenience store on the south end of town called 52-Pik-Up (it’s located on U.S. 52). During summer, Tag guides fisherman on Brookville Lake.

Bob Felix, longtime property manager of Brookville Lake, has known Tag ever since he can remember. “He’s well-liked and respected. His business is good for the area, good for the lake. Everybody knows Tag,” Felix said.

Nobbe grew up in the little southeastern Indiana town during construction of the region’s best-known feature, the 5,260-acre Brookville Lake. His generation was the first to have faint recollection of the town before the lake.

“I don’t remember the lake not being here. I was born just about the right time,” Nobbe said. “I went to St. Michael Catholic elementary school and back then we never had air conditioning, so if it was summer we had to open the windows. We heard the backup beepers of the earth movers and bulldozers. That’s the only clue I had that something was going on.”

Young Tag might not have known it, but the lake would be a defining force in his later life. Early on, however, Nobbe was showing symptoms of an affliction that affects many young men and women – an obsession with fishing.

Not unlike more than a few adolescents, Nobbe and his best friend used to bend the rules during sleepovers, but their scheme didn’t include the traditional mischief.

His early nocturnal forays were a foreshadow of his guide business, but the convenience store, built in 1987, came first. Naturally, 52 Pik-Up wouldn’t be a run-of-the-mill store. The Nobbe’s saw opportunity in the region’s outdoor activities, and catered to the sporting clientele.

“We ended up building a convenience store for the simple fact of where we live, right next to Brookville Lake. It’s a tourist area, it’s a fishing area and it was a good fit, we were outdoor people,” Nobbe said. “We built (52 Pik-Up) like any other convenience store but we built it with the idea we’re going to sell live bait, tackle and fishing licenses, we were trying to find the niche in the business.”

The Nobbe’s niche-finding efforts were successful. 52 Pik-Up became not only the place to get fuel and snacks for a day on the lake, but also local knowledge and hospitality. As a fisherman, Nobbe took the task of choosing what fishing tackle to carry seriously. It started innocently enough.

“Our store is not a huge. We had to determine what we were going to sell and we really didn’t know so we started at first relying on people that went fishing to give us an idea. We talked to some other people in the business just trying to figure it out, and we just couldn’t get a feel for what to carry.”

Pardon the cliché, but Nobbe wanted it done right, so he did it himself.

“So I decided that I would start fishing every day, or at least four or five days a week. I would get up at 4 or 5 in the morning then write down what I caught where, and just different things like that. If I was catching them on live bait as opposed to a spinner bait or whatever I would know that and expand on that from different sizes and colors.”

The key to Nobbe’s plan, however, was combining his “research” with his business. He had an idea for that too.

“I got a big 30-day calendar over the cash register. When I came back I would write down the water temperature, if the lake was going up or down, if it was clear or muddy, what I caught and what on, and then every day I would write that down (on the calendar). Customers got to coming in and looking at it because it would give them some kind of an idea where to start.”

It was only a matter of time before gathering and disseminating fishing information got hands-on, thought it really wasn’t Nobbe’s idea.

“After about a year of (the calendar) some people would come in and shake my hand and thank me because they had caught fish. But then there were other people that didn’t catch anything and would say, ‘Can you take me out?’ I’m pretty busy, so I just kind of put that off.”

“Then my wife says, ‘You might as well try it, you may like it , it may work out.’ That’s how I got started guiding fishermen 14 years ago. For the first couple years it got real busy pretty quick, now I’m as busy as I could be.”

Nobbe guides for striped bass, crappie and walleye. Throughout the summer he guides 7 days a week, as many as 70 days in a row. For many fishermen within and beyond the Brookville area, getting on Nobbe’s schedule is a big deal.

“Tag’s reputation on Brookville Lake can best be summarized in one word – outstanding,” said Felix. “If you’re talking to someone about fishing on the Lake they give you their opinion and then end up saying, ‘If you really want to catch fish on the lake go down to 52 Pik-Up and ask for Tag Nobbe, he’s the best around.’”

Nowadays Nobbe’s reputation precedes him on multiple fronts: as a fisherman, savvy businessman and all-around friendly guy. He stresses that tourism will be a major factor in the future of the Brookville area and he works with other local businesses to keep visitors coming.

“These communities like Brookville and (nearby) Liberty depend on the lake for an awful lot of their income,” Felix said. “If (the income) wasn’t there, these places would wither and blow away.”

The Brookville area may not be immune to larger economic trends, but with Tag Nobbe as resident and business owner, Brookville’s chances are as good as any.