The Art Of Traditional Archery

The Art Of Traditional Archery 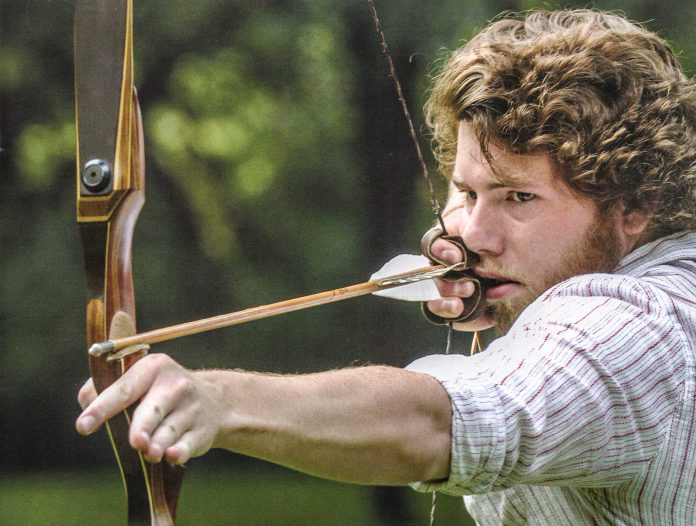 I pull an arrow from my quiver and lay it across my traditional bow, nocking it on the string as I draw my hand up the arrow, feeling for the raised ridge on the end to correctly align it.

In the same motion, I raise the bow with my left hand until it’s pointing at the spot downrange that I’ve been burning a hole in with my eves. I draw the bow with three fingers, holding the arrow tight against the nock point that marks where it should ride on the string, pulling back until the knuckle of my thumb on my right hand grazes my cheek.

All of this is done without thinking. It is a learned sequence ingrained by practice and years of repetition. At full draw the world narrows to the tiny spot of my focus. Since traditional bows have no sights, instinct points the bow where I look.

My attention closes in like tunnel vision, my brain figuring distance and adjusting imperceptibly. A moment later my fingers relax and release the arrow. I follow through, leaving the bow raised for a second as I watch the arrow fly toward the target. The spinning fletching, feathers attached to the arrow for stability, softly whistles as the arrow gently arcs toward the target. It looks good—still good, and the arrow pierces the target with a sharp smack.

I’ve hit an empty gallon milk jug hanging on a string in front of two stacked bales of hay at about 30 yards. “Not bad for using a tool made of only wood and string,” I think.

The hit makes me feel sharp and confident, as if it were pre-ordained that my arrow will strike where I will it to go. I start to feel anything within shooting distance is in danger of my bow. I select another arrow and follow the exact same routine: look, draw and shoot. That’s all it takes.

Just as last time, I focus hard. As if meditating, I visualize the arrow slamming into the jug, dropping in on the target like a guided missile. I release the arrow almost unconsciously, letting go the instant I feel on-target.

I leave the bow up for a moment and watch the arrow fly, already sensing the outcome, just waiting for that final thump of success. Then my hand-crafted, one-of-a-kind arrow sails high and left of the two stacked bales backing the target, into the thick woods.

I missed by at least a yard. The last I see of my arrow is a flash of white fletching as it glances off a branch, the first of many. I hear the clattering, popping and cracking wood as the arrow careens at a new angle off of everything it hits, making it almost impossible to find in the jungle-like undergrowth.

The cacophony ends. The woods quiet again, save for the buzzing of the bugs. My confidence from the first shot evaporates, followed by a hangover of private embarrassment and frustration. I look at my father standing next to me, bow in hand, waiting his turn to shoot.

He shrugs. “You see where that went?” I ask flatly, no attempt to conceal my irritation. So it goes with traditional archery.

I’m not the first to feel disappointed with a shot, just one of the most recent.The bow has a long history that few other inventions can match. Before the effective use of gun-powder, the rise and fall of civilizations often hinged on their hunters’ and warriors’ prowess as archers.

But not long ago, modern firearms became the tool of choice for war, hunting and sport, and the bow seemed destined to fade. But the mystique of archery would not die.

Resuscitated by a group of “modern” traditional archers worthy of the ancient legacy, the bow has returned with a small, yet dedicated following. The reason for the popularity may be that the outward simplicity of the traditional bow veils the complex subtleties of shooting it.

Bows almost always shoot straight; people rarely do. Consistency defines a great traditional archer. Many practitioners shoot well often, having streaks of brilliance when they can’t miss. But few are right-on all the time, under different conditions, at all reasonable—and sometimes unreasonable—distances.

Different clothing can throw off shooting. A change in target type can throw off shooting. Almost any deviation from ideal conditions can be trouble. The worst fluctuations occur inside a shooter’s head. Call it finding the Zen spot, focusing your chi, keeping your head in the game or the cliche “mental toughness,” the exact term doesn’t matter; a great shooter must be here and now for every shot.

Seeking the highest level of archery is akin to chasing a ghost. It can be so close, so real one moment, then gone as if it never existed. Humans have been hunting this apparition since the tool’s inception. Some have gotten closer than others. Fred Bear, Howard Hill, brothers Maurice and Will Thompson, Will Compton, Saxton Pope and Art Young are among the most respected archers in recent history.

They fit into the history of archery as the modern forefathers of the style, equipment and culture of what’s called traditional archery today. Though these giants weren’t all of the same generation, Maurice Thompson was born in 1844 and Bear in 1902, all were all expert shooters by any standard.

Various accounts indicate that the ability of some approached supernatural. Hill, whose nickname was 01′ One Shot, did much of the shooting for the 1938 movie “The Adventures of Robin Hood.” Including retakes, he made 45 shots on stuntmen who were protected from his blunt-tipped arrows by a pad of only 19 x 12 inches. All of Hill’s shots were true; not one stuntman was injured.

Hill is considered by many to be the best shooter of the modern era, but the others mentioned are also noteworthy. Accounts of excellent shooting are integral parts of most every story told about them. During the late 19th century and early-to-mid parts of the 20th, these shooters brought the traditional bow out of obscurity and established it as being capable of taking down game most people considered too large to be claimed by bow.

They also shot accurately enough to take birds in flight and small game at long range. To different degrees, (consider the vast changes in transportation during their era) these archers traveled the United States and frequently abroad, searching for new challenges.

A rich literary tradition immortalizes many of these adventures. Maurice Thompson’s “The Witchery of Archery,” Pope’s “Hunting with the Bow and Arrow,” Hill’s “Hunting the Hard Way” and “Fred Bear’s Field Notes” are a few of the most well-known titles. These books tell true tales of danger, skill and dedication to sporting principles.

Their stories illustrate the importance these archers placed on hunting and shooting being practiced in a way they found respectable. The advantages they denied themselves by using

Traditional equipment always increased the difficulty of the hunting and shooting, sometimes to the point that when they pursued large game, as in the American West and Africa, it put their lives in much more danger when compared with the risks taken by those hunting using then-modern means.

These archers demonstrated the beauty in choosing to pursue game and shoot with traditional equipment and showed that old designs and materials can deliver the accuracy and lethality for hunting almost anything.

The bows, arrows and points used so effectively by Bear, Hill, the Thompsons, Compton, Pope and Young have changed only slightly with time and technology.

Their bows were of traditional designs called long-bows, recurves (the type I use) or flatbows. The longbow is recognizable as the traditional English bow. It is at least 5 1/2 feet long and is straight when unstrung.

The flat bow is similar, but wider and flatter than the longbow. The recurve, as the name implies, curves back at the tips to provide more cast, or power, and comes in a variety of lengths.

These bows can be constructed in a number of ways. They are almost always made of one or a combination of hardwoods. Often these bows are laminated on the front, back or both flat surfaces.

A laminate is a separate layer of another material like bamboo, sinew or fiberglass applied to a surface of the bow to strengthen it. Layers of wood can also be laminated together to bond pieces of the bow during construction.

A bow constructed using laminates, while not as purely traditional, is almost always more efficient than one made without such materials. Arrows are traditionally made of wood, most often cedar these days.

More modern arrows are made of aluminum. Some traditional shooters use aluminum because the shafts are lighter than wooden shafts. Arrows can be tipped with an almost endless variety of points.

There are specific points for shooting targets, hunting birds and small game, and for shooting in brush, where it’s easy to lose an arrow. The most recognizable point is the broadhead, which is used to hunt large game.

A broadhead has at least two sharp edges, often four. Early metal broadheads were fairly simple in design, often triangular in shape and made of one or a few pieces of metal bonded together.

Modern designs range from broadheads with removable blades to those that deploy their blades when the arrow strikes the game. Many of these archers influenced the design of traditional-style equipment, and some produced their own.

Bear is probably better known for starting Bear Archery Company than for his hunting and shooting. The company went through a number of phases, but has been making equipment since 1933. It’s still in operation today as a major manufacturer of all types of archery equipment.

Even though Bear equipment is easy to find and affordable, the company’s products, especially the bows, have come to embody the modern spirit of traditional archery.

An archer can spend three or four times the price of a Bear bow and come away with one that isn’t as pretty and doesn’t shoot as well. Bear bows are made using fiberglass laminate and a variety of good-looking woods.

Interestingly, older Bear bows are among the most desirable. Vintage Bear bows are a common sight anywhere people shoot in the traditional style. These bows, many from the 1950s, ’60s and ’70s, are being used today just as they were when new.

Many are in great condition, although some haven’t fared so well or have been modified by an amateur bowyer (one who makes bows), usually much to the disgrace of the bow.

The basic designs on which old Bears are based haven’t changed in centuries. The technology that has been used has advanced about as far as it can and still be called traditional.

There’s no telling how long these classics will be in active use. For years I’ve been shooting a Bear Kodiak Hunter built in the ’60s. The bow was already well-used but in great shape when my father bought it from a friend when I was just a boy.

Much time has passed. My dedication to shooting well waned for a time but is now as strong as it ever was. I suspect it’s returned for good. The ghost I’ve chased ever since I could draw a bow is close now, too close for me to quit. And I am not alone.

The spirits of long-dead archers still call others, bewitching a new generation to take up the bow. Young folks are common sights at traditional shoots, wielding heavy bows and enough bravado to test themselves against this ancient art.